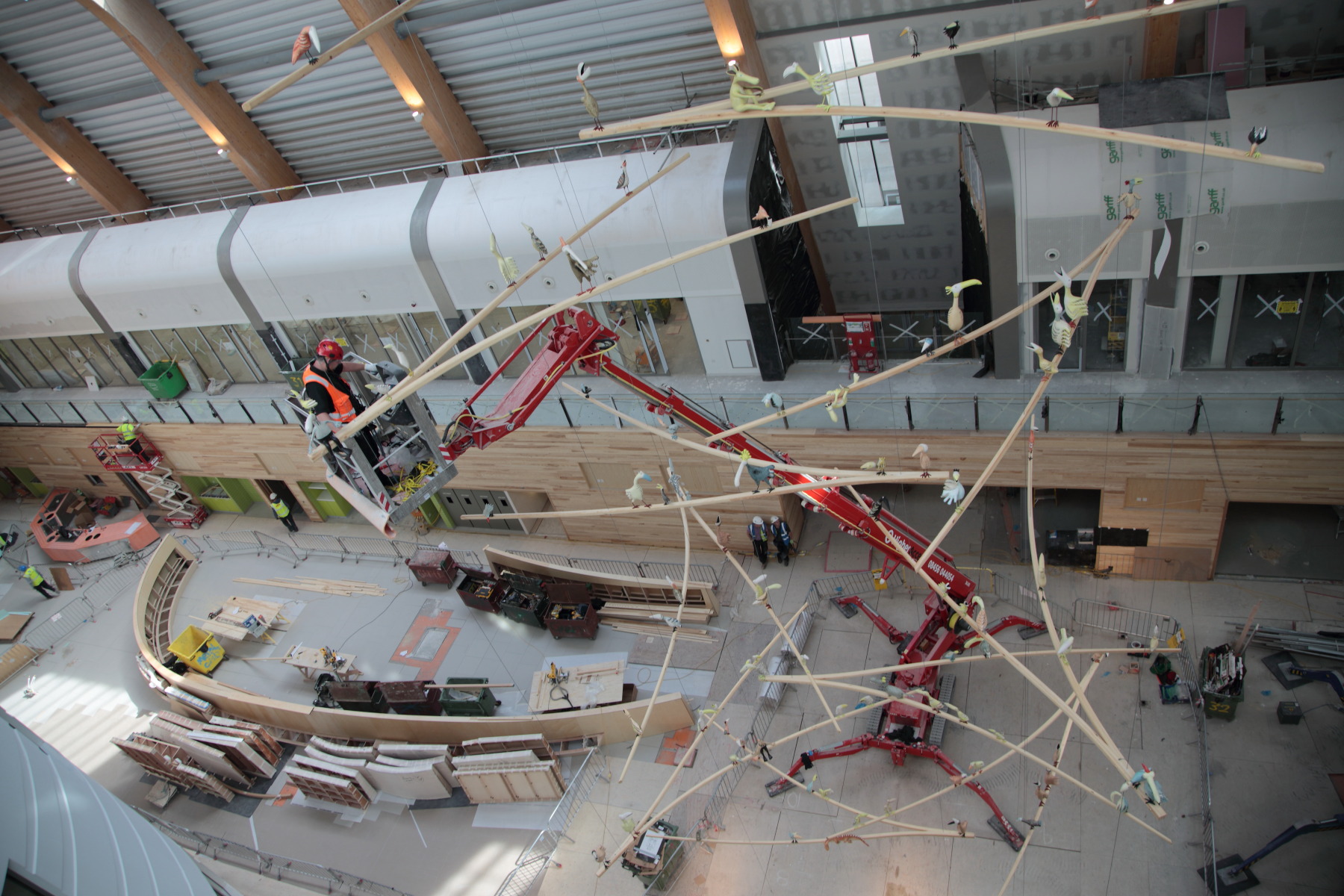 When an artist gets in touch to discuss hanging a piece of artwork, you know the day has just become that bit more interesting!

Back in April 2014, UK Rigging was approached to look at suspending a large and intricate piece of artwork from the atrium in the brand new Alder Hey Children’s Hospital, due to be opened in September 2015.

Sketches of the artwork and CAD drawings of the venue were made available. A UK Rigging Project Manager visited the site to draft suspension methods and estimate costs.

The brief was for five high tension wires to be attached to the ‘glulams’ (Glue Laminated Timber). As specified by the artist, each wire was to create a catenary curve of no more than 1500mm from the ceiling height of 24m. Each of the five wires would suspend two more wires, onto which ten pieces of artwork would be attached in a variety of combinations; each piece of artwork being attached to three out of the ten drop wires at regular intervals with the final piece suspended in line with the first floor balcony.

With each wire suspending different loads in different locations along its length, each modification of the artwork required careful calculation of the catenary forces placed upon the glulams. Over the course of 9 months, UK Rigging worked with the client to develop a solution within a set budget that met everyone’s criteria ready for the installation.

The installation was carried out over three days in August 2015.

Due to floor limitations, access could only be achieved through specialist tracked Spider MEWPs.

Prior to the installation, in-house testing was carried out to establish the load on each individual wire and the catenary curve produced. Models were made to evaluate artistic and practical constraints.

The suspension system was designed to incorporate fully adjustable components so installation engineers were only required to visit the top rigging during the initial installation phase. By doing this, the overall safety, the time required on site and therefore overall cost was reduced. Small adjustments could be made during the final phase after the artwork was suspended.

With a ceiling height of 24m and the only attachment points being those installed by UK Rigging, a lifting system was incorporated into the installation to carefully raise each piece of artwork to the relevant height. At this point, drop wires were inserted and terminated before being gently lowering into the correct position. Once all the main pieces were in place, a combination of cloth tape and laser measures were used to accurately locate where each character was to be placed. Adjustable fittings recessed into the artwork were used to fix the characters to the main pieces. Great care was taken to prevent any damage to the characters.

A check fitting was placed 10mm below each wire rope termination allowing visual checks from the balcony for movement over the coming years. On the top rigging points, marker paint was used to enable visual inspection from the balcony to check no movement of the nuts had occurred due to vibrations.