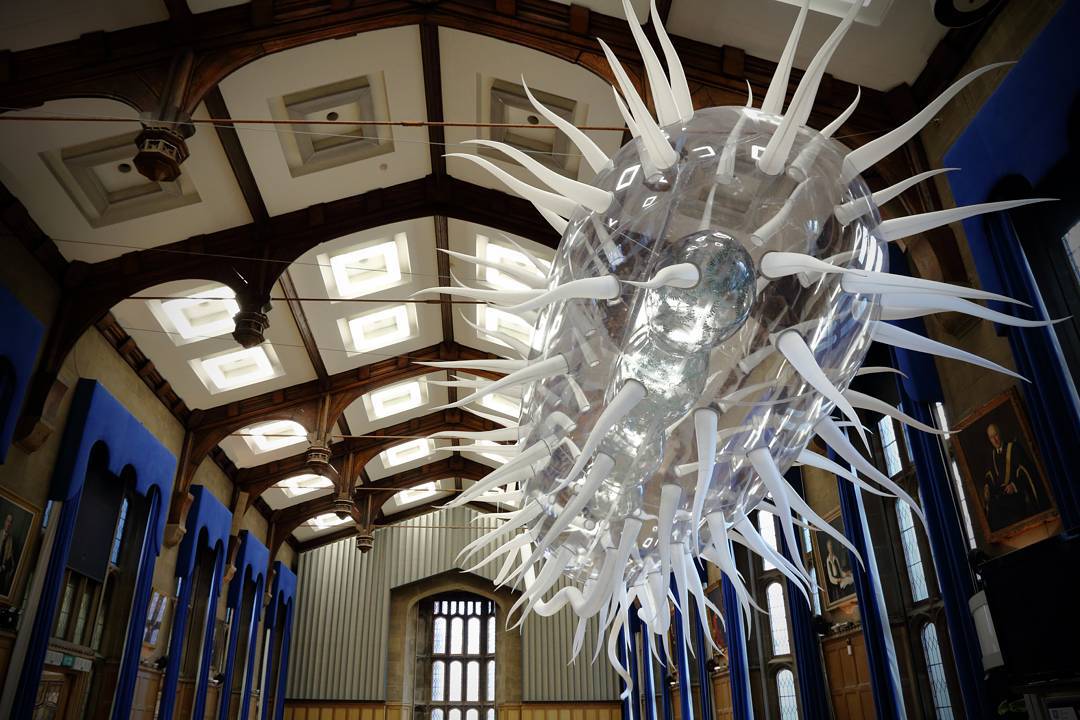 Inflatables are not usually associated with requiring a rigging company for installation.

However, when the inflatable is 30m long, 5m wide and 5m high, it’s a slightly different scenario! The University of Sheffield approached UK Rigging to provide a solution to suspend the large scale inflatable E.Coli bacterium in two separate locations.

The first location was in The Winter Garden, Sheffield. Being an active public area during business hours, a finite build time was available. With a lack of power available on site, the lifting method was to be ropes and pulleys. After submitting a risk assessment, proposed method statement and safe system of work to Sheffield City Council, UK Rigging was awarded the contract for the installation.

Due to limited floor loading capacity, it was necessary to use a Teupen Leo Spider Lift; these machines are significantly lighter than a self-propped boom with the equivalent platform height.   IPAF certified Spider Lift operators (IPAF Category 1b) and NRC qualified riggers installed a number of temporary suspension points from the roof beams.  The inflatable E.Coli was then raised on a rope and pulley system and connected to its ‘deads’.

Several additional suspension points were installed to position the flagellum of the inflatable.

The venue was clear with plenty of time before the public arrived the following day.

Firth Hall, The University of Sheffield

The second location was confirmed with a lead time of only two weeks before the installation date in the Firth Hall at the University.

Due to the listed status of parts of the building, the inflatable could not be suspended in a conventional manner. After consultation with the University management, the solution was to fit eye bolts to the walls as high as possible and install horizontal steel wire ropes spanning the room to suspend the inflatable.

Following two days’ warehouse work using our load cell monitoring system, a number of possible configurations were presented to the University detailing the orientation of the inflatable, the forces it would impose on each eye bolt and the achievable trim height of the inflatable. Due to the 140° and greater apexes created on the horizontal wire ropes, the exponential increases by raising the inflatable would cause significant increases to the loading on the eye bolts meaning on-site measurements were critical, with accurate measurements taken a number of times throughout the installation process.

The inflatable weight was 126 kg, with the total force on the 6 eye bolts of over 17.65kN. These potential high forces generated by a such a light weight load were one of the reasons the University decided to contract a rigging company to undertake the installations.

The work at height was by scaffold tower due to floor loading limitations. UK Rigging provided PASMA trained riggers to assemble the tower for the eye bolt installers before using the tower to complete the installation of the inflatable.